Gather round boys and girls, it’s Wednesday, which means yesterday was WEIGH-IN day! I went to group at 5.30, all nervous and jittery to face the scales after not weighing myself ALL WEEK, a huge achievement for me 🙂

A slightly underwhelming 1.5lbs off. Hmmm. I was disappointed 😦 I’ve been 100% on plan this week, something which has never happened before on any diet I’ve undertaken haha and I just feel I did everything I could to lose weight. However, I haven’t got a huge amount to lose (1.5 stone, maybe 2 depending on how it goes) so I’m not expecting to see huge losses each week. I guess I just thought for the first week, I’d see 2 or 3. Never mind! Onwards and upwards! One thing that was good is when I got home after group, I didn’t feel a mad urge to drink wine and eat chocolate and treat (cheat!) myself to make up for my disappointing loss. I simply made an on-plan dinner like every other night, and enjoyed it whilst watching Dr Christian Jessen chastise overweight people on Channel 4. Does anyone else LOVE TV shows about diets and weight loss? I’m all over them like a rash, especially this time of year!

So I’m going to carry on this week as I’ve been doing, introducing more speed foods where I can and making sure 1/3rd of my plate is always speed. Hopefully I’ll see a bigger loss next week 🙂 In other news, my fiancé lost an incredible SIX POUNDS this week! He was absolutely chuffed and I’m so, so proud of him. Go Benj!

I have made some delicious meals over the past few days, something I am going to continue this coming week. I love trying new recipes and I find it keeps me interested and on-plan.

Here’s a brief round up (“Woody’s rounnndddd-upppp…” you’ll get that if you’re a Toy Story fan. If you aren’t, soz) of my eats over the past few days. Breakfasts have been porridge and water every day which surprisingly hasn’t got boring, with splenda, cinnamon and a chopped up banana. Still loving this combo!

On Sunday I cooked us a massive ‘grill-up’ – Tesco meat-free Lincolnshire sausages, sautéed potatoes, beans, mushrooms, tomatoes and fried eggs. All cooked in fry-light, all FREE! Well, until I googled the sausages and discovered they were 1.5 syns EACH. EACH!! So this was actually 3 syns 😦 Don’t buy those sausages. Unfortunately, I bought 2 bags, so we’ll be eating them for a good while yet.

Breakfasts this week will continue to be porridge or fruit and yogurt when I need to save my HEXB for later in the day. I always thought fruit and yogurt was a bit of a boring, wishy washy standard SW meal (something I strive to avoid in my own Food Optimising journey) but actually, it’s quite nice. I use fat free natural yogurt, sliced banana and pear, and a WeightWatchers Dessert yogurt on top. These have nice flavours like Raspberry Tart and Lemon Tart, and they just make the bowl way more exciting. These are FREE, but obvi Slimming World won’t be shouting this from the rooftops as WW are their Rivals. 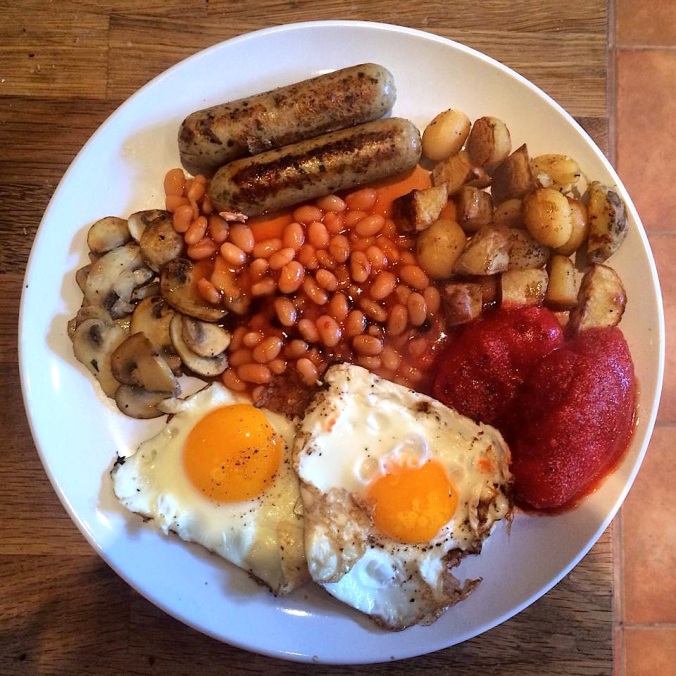 Lunches have also been leftovers or a serving of the massive tuna sweetcorn pasta salad I made last night. I’d definitely recommend making one of these to nibble on through the week, I used Tesco extra light mayo which is only 1/2 sun per tablespoon and I used 3 for the whole lot 🙂

Onto dinners! Oooooh I had some lovely dinners over the weekend! Friday night was burger night in our household! And what a treat that was. We had Quorn burgers, onion, lettuce, HEXA reduced fat cheddar, HEXB wholemeal roll, and I added bacon. So good! I was absolutely stuffed after this! Definitely going to keep these as a weekend treat so we don’t get sick of them, I feel like I could eat them every night though! 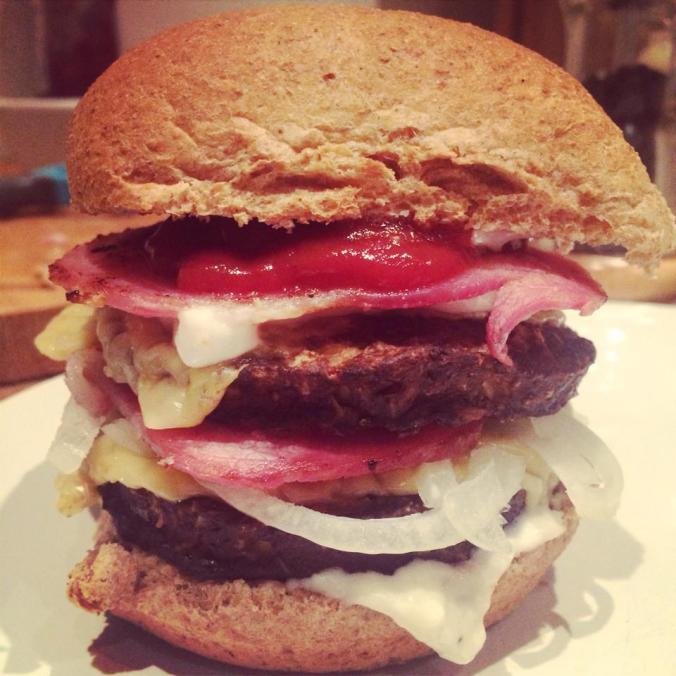 Saturday night I had rump steak with all the fat trimmed off, boulangerie potatoes (recipe here) and roasted veggies. I synned a tablespoon of the heavenly Creme de St Agur as a sauce for the steak. This was lovely! 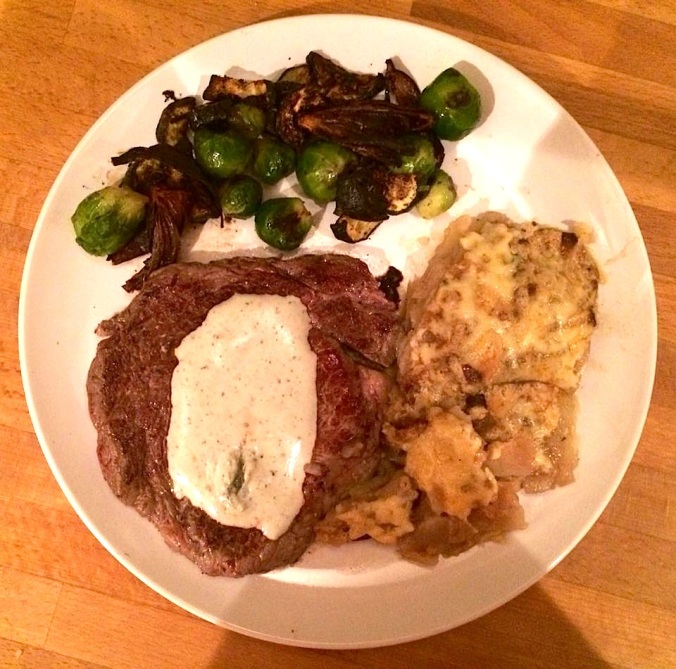 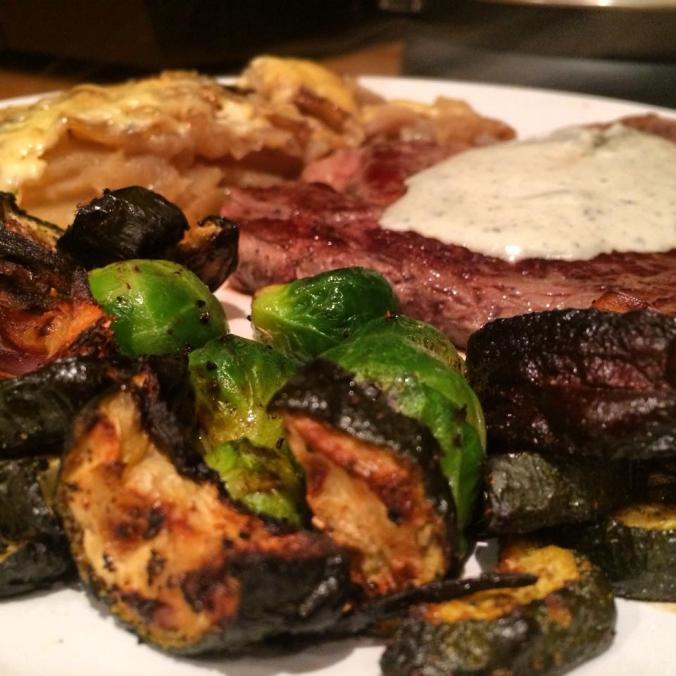 On Sunday I fancied something hearty and warming. Slimming World beef bourguignon fit the bill! I pretty much followed the recipe exactly apart from adding more garlic and chopped carrot, and leaving out the mushrooms. I also only had 250g of beef whereas the recipe called for 700g, so it was a much smaller portion! I served it over parpadelle pasta (free!) and sliced courgettes, with my HEXA of parmesan. You get a LOT of parmesan for your HEXA! 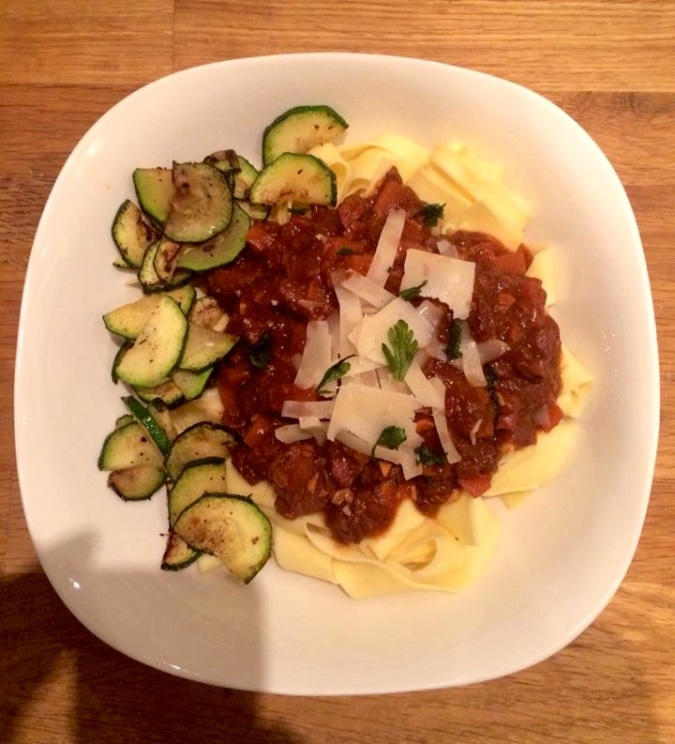 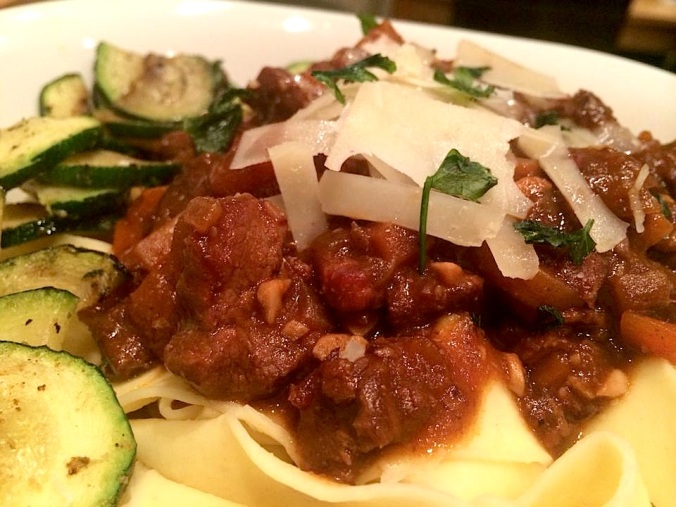 Monday night was a bit of an gamble, but it turned out really well! I had planned to do cajun spiced chicken thighs but we didn’t have any cajun spice. I used a bit of southern fried potato seasoning that was kicking about in the cupboard instead, simply rubbing it onto the thighs after removing the skin and all visible fat. Served with roasted vegetables, sweetcorn, roasted sweet potato wedges and a garlic yoghurt dip, this was amazing! I love meals like this, with lots of different flavours and textures. 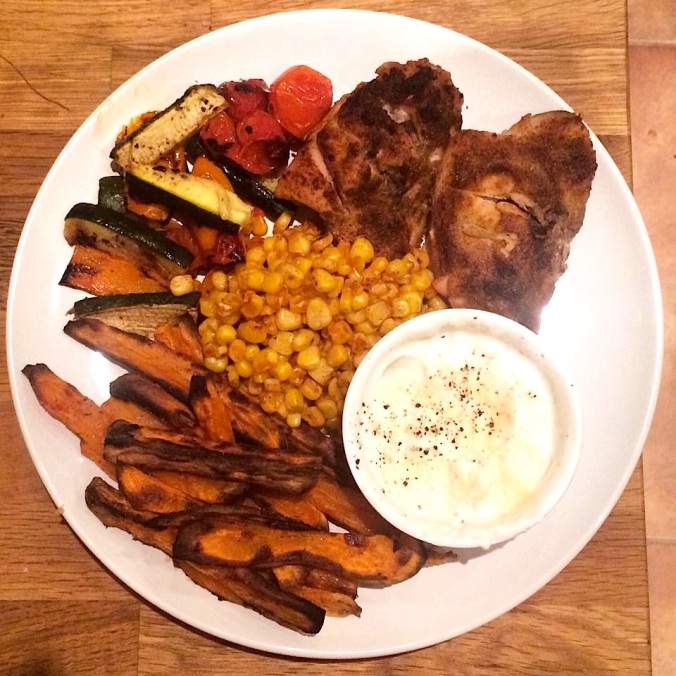 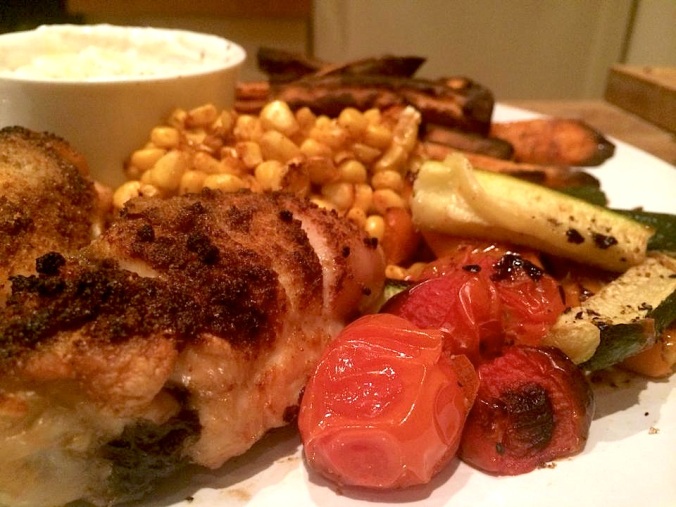 Finally, after weigh in last night, I had fish and chips! This was from the Fakeaways book and involved whisking egg whites and folding a yolk in to create a batter for the fish. I’ll be honest, the batter wasn’t great. After being out of the oven for approximately 10 seconds it deflated and went a bit soggy, pretty much tasting like fish with omelette on. Not necessarily a bad thing, but definitely not what I signed up for. I was prepared for this though as I’d read another bloggers experience of making this dish, and she warned this would happen. It looked convincing though and I was pleased how batter-like it appeared! Next time I’ll skip the batter faff and just have the fish plain, as it was delicious anyway 🙂 This was also my first taste of mushy peas (I know, I’m 27 and need to get out more) and I loved them! I mixed in loads of salt, pepper and garlic powder as they were blander than bland to begin with, but after that they were damnnn good! 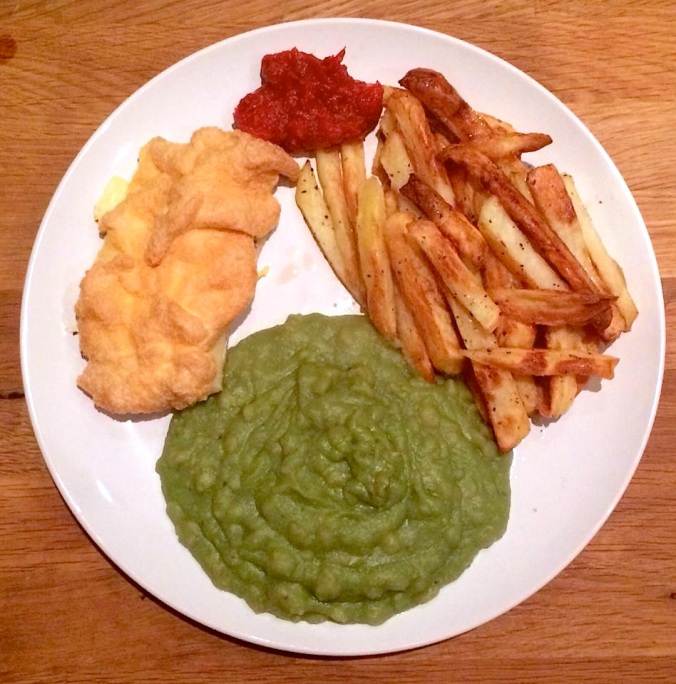 So that was my week! Onwards and upwards to this new week! I’ll be doing our meal plan tonight and getting organised for the next few days 🙂 Good luck everyone else following SW!

9 years of friendship with this one 🥰 awesome weekend with @disneyindetail, Mr Disney in Detail and @benmillier ❤️ sometimes a night of good food, too much wine and some serious life therapy is just what you need ☺️
The pictures REALLY don't do this justice but I felt like cooking tonight sooooo I made vegan baked ziti, complete with super flavourful dairy-free béchamel and rich, unctuous bolegnese. Layered the two sauces over pasta, topped with cheese and baked it all until hot and bubbling 🙌🏻 seriously my favourite plant-based experiment to date! Scroll ➡️ for layers and pre oven! #veganinspiration #veganuaryuk #veganuaryeats #plantbaseddiet #plantbased #veganuaryinspiration #veganuary #plantbaseddinner #vegandinner
"...can I help you?" #birman #birmancat #birmansofinstagram #saffiethebirman #catsofinstagram #spoiltcat #spoiltcatsofinstagram
Date night is the best night ☺️ Last night we enjoyed a delicious plant-based meal at @chiquito 🌵 Nachos, loaded sweet potatoes, fajitas with @eat_oumph 'chicken' (absolute game changer) and a banana blossom burger with cassava fries 😍 all delicious, I was really impressed! Get the fajitas!! 🌯🌯 also, margaritas 🙌🏻 @benmillier #veganuaryuk #veganinspiration #veganuaryeats #veganuaryinspiration #veganuary #plantbased #eatingoutvegan #chiquito
Just sharing some more vegan meals ☺️ it's been a good week! A lovely fresh, veggie packed sandwich, more peanut tofu (could literally eat nothing but this until the end of time) with udon noodles, a FIT cheese, tomato and chives toastie, sausage pasta with roasted veggies, and porridge with peanut butter, banana and maple syrup 🙌🏻 #veganuaryuk #veganuaryeats #veganuary #veganinspiration #veganuary2020 #veganuaryinspiration #dinner #dinnerideas #dinnerinspiration #veggiefood #meatfree
Also also! We took a little stroll to Aldi cause we know how to live on a Saturday and they have SO MUCH plant-based stuff it's amazing! Look at those fake Magnums!!!! So if you're plant based or doing Veganuary then get yourselves down to Aldi because it is kicking OFF 🙌🏻 #aldi #aldifinds #aldivegan #aldiuk