So, my first week of Slimming World! I started following the plan on Monday, weighed in to my new group on Tuesday, and it’s now Thursday night. We (me and the boy are both following the plan!) have been Food Optimising for 4 glorious days. It’s been really great! I already feel better, happier, calmer, and more in control. We pretty much spent 2 weeks over Christmas just eating whatever we wanted and to be honest, by the time we went back to work, I just felt so groggy and bloated. I felt like I’d eaten everything I could possibly have wanted over the Christmas period and I was ready to start eating fresh vegetables, smaller portions, and just generally food that was better for me.

Which coincided nicely with my return to Slimming World! My first weigh in was obviously not pleasant, but it won’t be going any higher than that now 🙂 The consultant was fab, the group was friendly, and it’s right down the road from where I live! Very convenient indeed. I optimistically bought a 6 week countdown and I’m feeling SO motivated and excited for the next 6 weeks! I really am going to try to be strict and not have any ‘treat’ or ‘cheat’ days; I hate to be a cliche but I’d only be cheating myself! As I did last time. But we won’t go into that.

So, my eats! I’ve been eating some lovely things so far, and we have even more yummies planned for the rest of the week!

For breakfasts, I’ve been having porridge. I’ve never really had it before but I don’t know why, it’s so lovely! i’ve been having it with splenda and cinnamon, and also ‘whipped’ with a banana! I slice the banana really thinly and whip it into the oats with a whisk as the oats cook. The banana melts away and creates a really creamy, fluffy texture that also increases the volume of the porridge. I end up with a huuuuge fluffy bowl of oats and it fills me up until lunch, perfect!

I made a big batch of tuna pasta salad on Tuesday and have been having it for lunch every day. 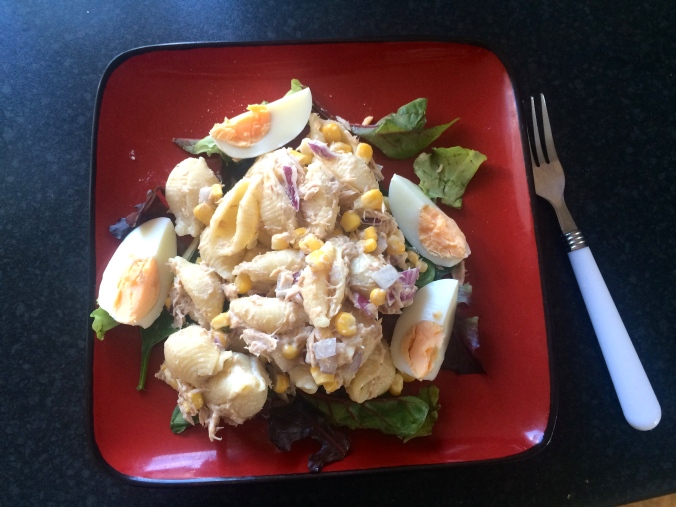 It’s just pasta, extra light mayonnaise, sweetcorn and red onion. The EL mayo is 1 sun per level TBSP and there were 4 in the mix. 4 portions, 1 syn a portion! Yay! I’ve been having this with salad and fat free balsamic dressing, and occasionally a boiled egg if I really want to push the boat out. It is REALLY filling – on Monday I just had a salad and I felt all light-headed and horrible all afternoon which I think was a combination of not eating enough, and my poor body complaining that I wasn’t having any sugar or fat. We didn’t have the shopping delivered until Tuesday so Monday was slim pickings in the kitchen, hence the lame lunchtime salad.

Finally, onto dinners! The best meal because I have complete creative control in the kitchen and more importantly, TIME!

I believe that my first foray into Slimming World failed because, well, I gave up. But, before I gave up, I was trying to shoehorn my favourite food into the SW plan and it just wasn’t working. Some things work great cooked the SW way, some don’t. Creamy, fattening Italian sauces don’t work so well, simply because it’s hard to replicate creamy, buttery flavours without the calories. Natural yogurt has a funny twang IMO, as does Quark. I do love using Quark, but sometimes it splits even if you’re super careful with the heat, and then your dinner is ruined and you cry. Anyway, my point is, this time I am going to try to make new dishes that I wouldn’t have tried previously that work AMAZINGLY cooked the SW way, rather than trying to make pizza crust from Smash and feeling slightly dirty.

This week thus far, we have had a delicious tofu vegetable noodle dish on Monday (which I didn’t photograph 😦 ) a quick Quorn chill and baked potato on Tuesday:

A rather experimental chicken korma on Wednesday:

This I possibly wouldn’t recommend…I LOVE korma and I love it because of the buttery, creamy, coconutty, almondy flavours, all of which are tricky to replicate when you’re fat-restricted. The korma in the Fakeaways book (my new bible) didn’t mention coconut at all and to be honest I wasn’t having any of that. I popped to Co-Op on the hunt for a fat free coconut yogurt (fairly optimistic given the size of the shop) and unsurprisingly, they didn’t have any. They did, however, have a new ‘Pina Colada’ Mullerlight. Hmmmm….would that work?I was tired and hungry so decided it would, and bought one. I also randomly bought a tiny bottle of almond essence which I thought might be a good substitute for the almonds normally in korma.

It…wasn’t great. The yogurt was okay (I sieved out the pineapple…) but even half a cap of the almond essence was too much, and it just reminded me of a cherry bakewell. Don’t get me wrong, I ate it all, but it left a weird taste in my mouth. If you like curry, I’d recommend going with a tikka or jalfrezi or something more tomato based, which is better suited to the ingredients you’re allowed to use.

Finally, tonight was the inaugural outing of the pork pad thai recipe, again from the Fakeaways book:

I’m happy to report this was a much more enjoyable experience! I made it as per the book, with twice the amount of garlic and chill as I like strong flavours. However, when I tried it, it was bland 😦 so I added more of each, more soy sauce, and a tablespoon of sesame oil (2 precious syns) to jazz it up a bit. It tasted a lot better after this, and a whole lime squeezed all over it completed the experience. I didn’t have any of the required veg in the recipe so I stir fried some veggies in a separate pan, and ate them alongside the pad thai to ensure I had my 1/3rd speed veggies.

I halved the recipe as I’m the solo meat-eater in the household, and I have over half left for another day 🙂 Success!

I don’t snack a huge amount but when I’ve been peckish, I’ve gone for apples and lean ham slices. Exciting stuff. My daily synage has been between 4-7 each day which i’m THRILLED with (I know it’s only Day 4 but humour me) because last year I pretty much always spent my daily 15 on silly things like condiments, wine and chocolate, which I don’t think was really helping my losses. So I’m chuffed with my restraint.

I’ll leave it there as I’m knackered and it’s been a long week at work. On tomorrows menu is CHEESEBURGERS, a meal that works insanely well cooked the SW way! We’ll have them with a boatload of free SW chips and I can’t wait. We’re staying in on Saturday night (January is a very frugal month for us, out of necessity!) and I’m planning to cook a lovely steak which always feels like a treat on SW. Sunday I fancy a nice winter warmer and I think I’ll do the Slimming World beef bourguignon mmmm!

Ooh I hope this happy, motivated attitude continues for the next 6 weeks! Wish me luck 🙂