For many moons now I have wanted to make my lovely boy a proper, fat, meaty, winter-warmer PIE. Pies are to boys, what salads are (unfortunately) to girls. The stereotypical British man spends his evenings tucking into massive plates of beef and ale pie, mashed potatoes and token greens, washed down with a pint of beer and darts on the TV. At least, in my head. But as we all know, this is not all men! And especially not lovely vegetarian men 🙂

When Ben was a meat-eater, I’m sure he won’t mind me sharing that one of his favourite meals was that most repulsive of convenience foods – Fray Bentos pie-in-a-tin. With mash and veg. And probably a pint of squash, seeing as he wouldn’t have been old enough to drink. While there are few things he misses about being a carnivore (fish, funnily enough, being one of the only things) he does sometimes reminisce about FB pies with a dreamy, faraway look in his eyes. So I decided to challenge myself to make the meatiest non-meat pie I could, and this was the result!

First things first – fillings. I wanted something hearty, steaky and gravy-y. No chicken and white sauce over here thanks! Unfortunately, steak is one of the hardest flavours to replicate in vegetarian form and we had sadly run out of seitan – the closest taste/texture we’ve found so far. So, I settled for Sainsburys own ‘meatballs’ with some veggie sausages thrown in for good measure. The sausages were very herby and flavourful and added a hefty meatiness to the mixture without much effort, always a good thing.

I started, as always, with chopped onions and garlic. I also made myself a little pan of very finely chopped onions and garlic for my own dinner – mushroom-less, pastry-less pie. So basically just pie filling – I’m a bit weird and don’t really like pastry or the shedload of calories it brings to every meal. I also despise mushrooms unless they are super finely chopped. A kids version for me!

I chopped up the meatballs and sausages and added them into the pan, along with some big chunks of chestnut mushrooms. Then, a selection of seasonings including rosemary, sage, salt and pepper followed by a generous slug of ale. We were slightly overwhelmed by the selection of ales in the supermarket and so plumped for a bottle of bog standard Newcastle Brown Ale. I simmered the mixture for about ten minutes, adding more herbs as I went until it tasted lovely and hearty. 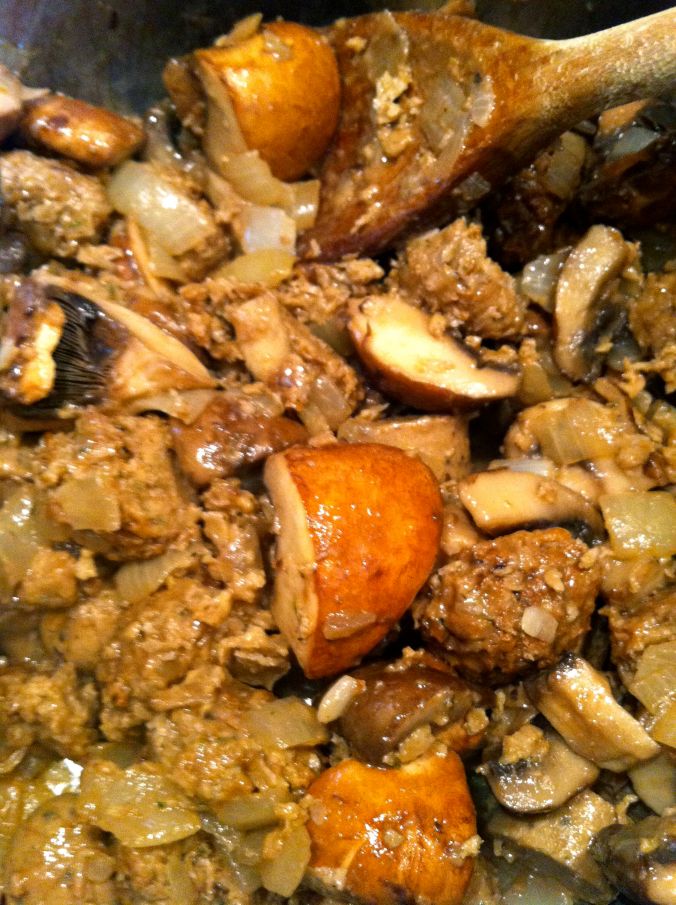 Once I was sufficiently happy with the taste of the filling, it was pastry time! For convenience I used a 500g pack of ready-to-roll shortcrust pastry. I divided the mixture into two balls of approximately 2/3rds and 1/3rd – the 2/3rds for the base and 1/3rd for the lid. It was then just a case of rolling the dough out with a bit of flour into a shape that would fit into the bottom of my pie dish with enough to line the sides.  (Apologies for the jaundice photos, I am hoping Santa is going to bring me a shiny new DSLR for Christmas this year which will pretty much change my life, and this blog, for the better!) 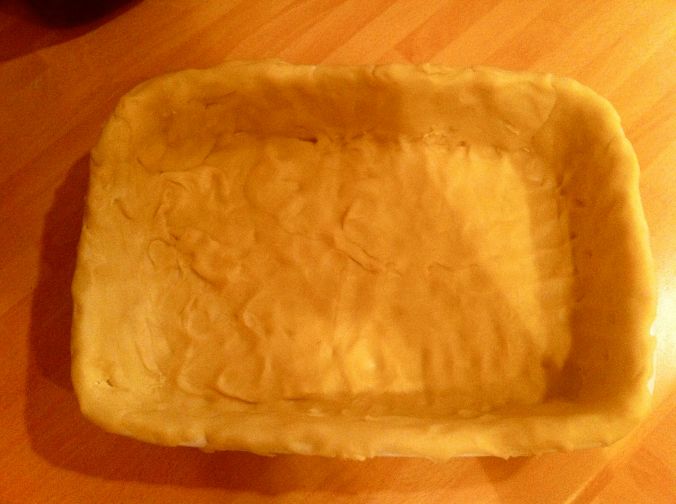 I then spooned the mixture into the dish and it filled up nicely, about 3/4’s of the way up the sides. Next came the bit I was nervous about – adding the lid! But, it was really simple and with a bit of deft flipping and quick fingers, my pie was lidded. I ‘forked’ the sides to achieve that authentic pie effect and added some hearts to the top with some of the leftover pastry I had. Cute! 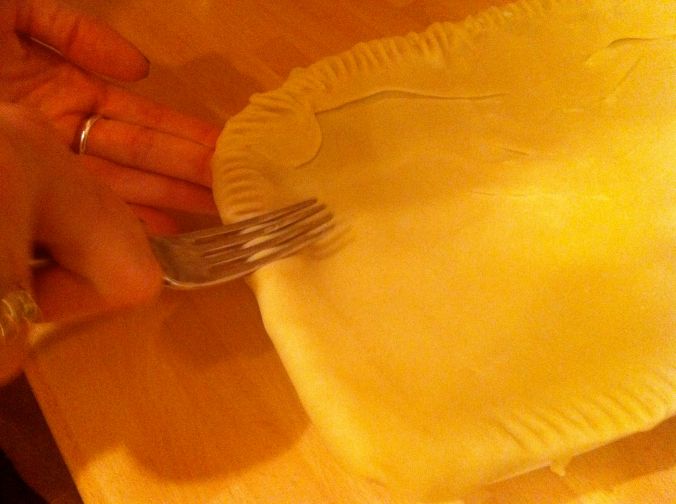 I brushed the top with milk and it went into the oven. I kept checking to make sure the pastry wasn’t burning but a medium heat seemed to do the trick. It emerged, shiny and golden, 45 minutes later and I cut into it with Ben watching eagerly over my shoulder.

Check it out! A proper pie!!

I served Ben a verrrryyy generous slice onto a plate already bulging with mashed potato, green beans and peas. I whipped up a quick gravy and his dinner was served. My dinner? Don’t worry about me, I had my tasty child-like pie filling and mash and was a very happy girl. A glass of wine helped immensely with this. 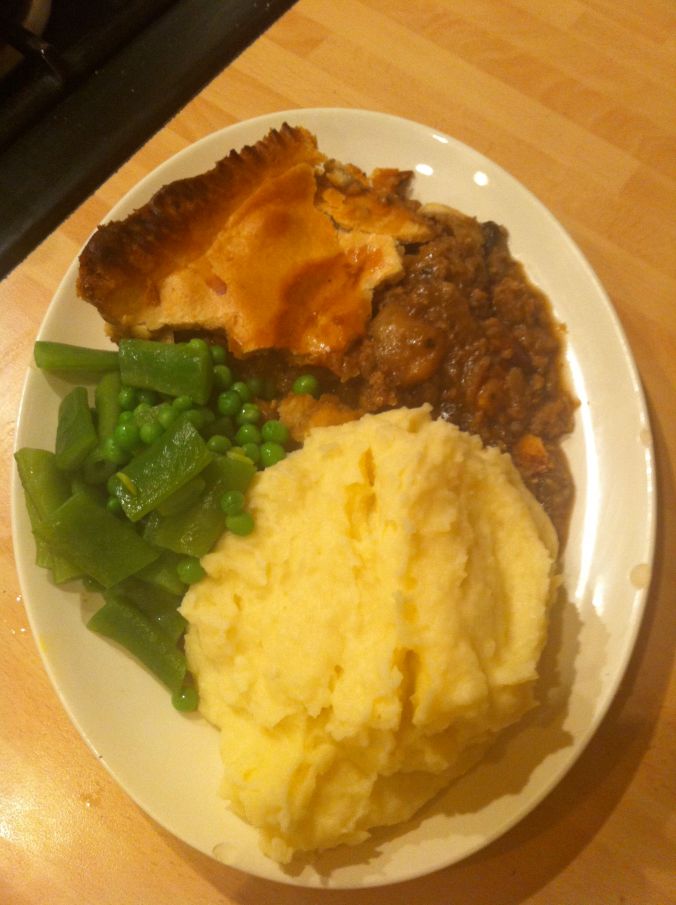 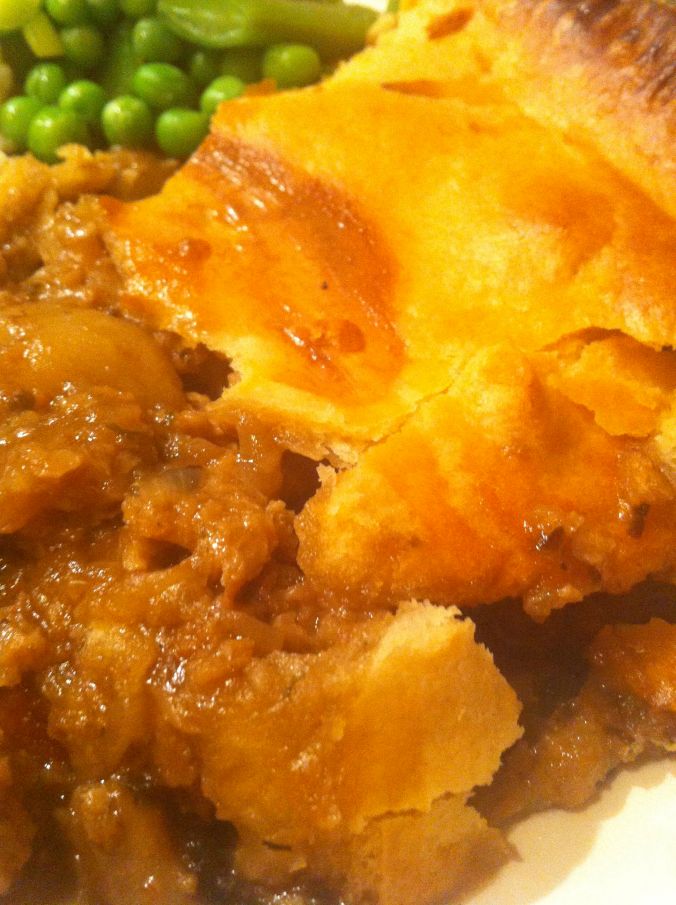 The filling was thoroughly ‘meaty’ – both in taste and texture. The medley of herbs combined with the reduced-down ale was really tasty and the Quorn meatballs broke apart slightly during cooking, which thickened the sauce. I really feel this is about as meaty as you can get with vegetarian pies – obviously vegetable and non-meat pies are delicious but sometimes it’s nice to just use fake meat as it was intended – a substitute for meat! In this instance, Quorn works extremely well and I really recommend this recipe if you or someone you love fancies a proper meat pie!

Finally just sharing some meals we've cooked at home!⁣ ⁣ 1. Vegan ravioli with a creamy garlic sauce using @kokodairyfree, schnitzel, roasted brocc and truffle balsamic glaze 🤩⁣ ⁣ 2. @waitroseandpartners sourdough pizza base with a boatload of @violife_foods cheddar, homemade vegan pepperoni and roasted peppers 👏🏻👏🏻👏🏻⁣ ⁣ 3. Even more peanut tofu udon noodles with stir fried brocc. I just can't stop eating this man.⁣ ⁣ 4. A BOOM TING plate of caramelised onion sausages with fluffy clouds of sweet potato mash, caramelised onion gravy and green beans. A real 'winter warmer' ❄️⁣ ⁣ 5. Aubergine pasta bake thingy with leftover béchamel, a beautifully rich, meaty veggie mince sauce and lots of cheessseee⁣ ⁣ 6. Tried a new facon from @this.uk and it was SO GOOD but quite expensive unfortunately 😭 nice for a Saturday morning bacon sandwich treat though!⁣ ⁣ What a week of food 🤩🤩🤩 #plantbaseddinner #plantbasednewbie #whatfatveganseat #veganuary #veganuaryeats #veganinspiration #veganuaryinspiration #veganfood #veganuk #vegan #vegetarian #veganuary2020 #veganrecipes
We also went for dinner at @frankienbennys and had a feast of plant-based dishes! ⁣🍃 ⁣ We got the loaded skins with vegan sour cream, crispy fried mushroom ravioli, rigatoni Ragu, garlic pizza bread with vegan mozz, and vegan verdure pizza. It was honestly all really good, and they have 50% off main dishes throughout Jan so hurry on down! ⁣👏🏻 ⁣ I also had the vegan pizza at @theroyalforesters in Ascot which was delicious, with big ol chunks of 'no chicken' and roasted peppers, plus a liberal drizzle of garlic oil which made me extremely, extremely happy. #veganuaryuk #veganinspiration #plantbaseddiet #plantbased #veganfrankieandbennys #veganmenu #eatingoutvegan #vegandinner #vegan #veganfood
🚨🚨 PUBLIC SERVICE ANNOUNCEMENT 🚨🚨⁣⁣ ⁣⁣ @7boneburgerco have a separate vegan menu with loads of good stuff on it 😍 I had the:⁣⁣ ⁣⁣ P no bj - vegan patty, miso peanut butter, crispy fried onion, facon lardons, chilli jam 👏🏻👏🏻👏🏻⁣⁣ ⁣⁣ With: chilli cheese lies - vegan chilli, fake cheese, jalapenos, yellow mustard, minced white onion⁣⁣ ⁣⁣ Both SO GOOD the peanut butter in the burger omggggg 🙏⁣⁣ ⁣⁣ Benj got the:⁣⁣ ⁣⁣ giant haystacks - Vegan fried f/range chkn, hash browns, vegan mayo, HP sauce, chipotle ketchup ⁣⁣ With: kung fu fries - sriracha mayo, gochujang, sesame seeds, crispy and spring onions⁣⁣ ⁣⁣ Also amazing!⁣⁣ ⁣⁣ I thought eating out as a vegan would be hard (or I'd have FOMO after seeing the rest of the menu) but it's actually been super easy and I've eaten some delicious food! 🤩🤩 ⁣More food to come!
9 years of friendship with this one 🥰 awesome weekend with @disneyindetail, Mr Disney in Detail and @benmillier ❤️ sometimes a night of good food, too much wine and some serious life therapy is just what you need ☺️
The pictures REALLY don't do this justice but I felt like cooking tonight sooooo I made vegan baked ziti, complete with super flavourful dairy-free béchamel and rich, unctuous bolegnese. Layered the two sauces over pasta, topped with cheese and baked it all until hot and bubbling 🙌🏻 seriously my favourite plant-based experiment to date! Scroll ➡️ for layers and pre oven! #veganinspiration #veganuaryuk #veganuaryeats #plantbaseddiet #plantbased #veganuaryinspiration #veganuary #plantbaseddinner #vegandinner
"...can I help you?" #birman #birmancat #birmansofinstagram #saffiethebirman #catsofinstagram #spoiltcat #spoiltcatsofinstagram