I’ve got a serious, chronic, all-encompassing addiction to steak, with blue cheese sauce.

Steak without blue cheese sauce, is, at this moment in time, unfathomable. It has to have blue cheese sauce. It’s got to the point now where not only am I ordering it every time I see it on the menu, but I am also only choosing to eat at places if they have it on the menu. Not ideal when I share my meals on my food blog, as they are all starting to look verryyyyy similar. I’m not sure how long this addiction will last but it’s been about a year now and my need for SWBCS (see what I did there?) is still relentless. I’ve pretty much just embraced it and accepted that the moment will pass, in time.

I never used to like blue cheese. Ironically, I often find that I don’t actually like the cheese itself, on it’s own. I much prefer it in sauce form. Sometimes I find it too strong and overpowering – obviously when combined with cream it becomes milder and much less ‘blue.’ This was confirmed in a sandwich I bought in America last year –  the ‘beef and bleu’ sub from the Artists Palette quick service restaurant at Saratoga Springs Resort in Disneyworld. I took one bite and tragically had to throw it away because the cheese was strong and almost bitter, overpowering everything else in the sandwich. Yuck! Guess I’m not as big a blue cheese fan as I thought.

The first time I had steak with blue cheese sauce was at The Barleycorn Inn, in Bishops Waltham. They used to have an ever-changing menu of exciting dishes and the steaks in particular always featured different toppings and sauces. I didn’t fancy anything else off the menu that evening so took a gamble on the ‘bacon wrapped, blue cheese topped’ variety, figuring I could always scrape the blue cheese off if it was a disaster. I was pretty excited for the bacon wrapped concept though, how often do you get the chance to eat bacon wrapped steak!? When it arrived and I started eating, I was blown away. The steak was wrapped in a generous portion of thickly sliced back bacon, seared to perfection while keeping the steak inside juicy and tender. Slabs of blue cheese were nestled underneath the bacon, infusing the steak with melted, cheesy goodness. The whole dish was also topped with a creamy, mild blue cheese sauce. It was ALMOST a blue cheese overdose but I was so enamoured with the flavours that I ate the whole thing, squealing with joy at every bite. Everytime we went back to the Barleycorn I hoped to order that dish again but unfortunately, their ever-changing menu meant I never got the bacon-wrapped version again, only the blue cheese sauce topped. Still delicious, but not the same! Although that does make my memory of that one meal extra special, in a nostalgic, reminiscing kind of way.

Since that first experience, I’ve ordered SWBCS a LOT.

Here are some of the S’sWBCS I’ve enjoyed 🙂 There are more not pictured!

Slack photo taking but this was from The Ship Inn, Weymouth!

Last but not least, SWBCS cooked by my own wonderful father! He knows how keen I am on the combo so fired up the BBQ one night last month when the weather was nice and surprised me with my favourite meal. What a treat! It tasted amazing and I had deep discussions with him about how to achieve a restaurant quality steak, at home. I was starting to realise how expensive my addiction was becoming and while I believe in treating oneself once in a while, going out especially for one dish was becoming a bit excessive! The average cost of a SWBCS, in my experience, is £16/17. Oops! He cooked our steaks on the BBQ so the heat was high enough to sear the outside while keeping the meat tender and juicy. Perfectly medium rare, just how I like them, with delicious sweet potato wedges on the side. Pretty much my ideal summer meal!

One Saturday night a couple of weeks ago, I decided the time was right to attempt SWBCS at home. I purchased a Tesco Finest ribeye steak which cost about £5, not bad I thought considering how much they cost in restaurants. I was just nervous about potentially ruining such a lovely piece of meat so tensions were running high! I was googling blue cheese sauce recipes on my iPhone whilst wandering around Tesco to buy ingredients, when I came across the answer to all my problems. I never know which blue cheese I’m not keen on – I think I like dolcelette so was preparing to buy that. However, I was ever so slightly dreading making the sauce whilst simultaneously ensuring my steak was cooked perfectly, it was all getting to be a bit too much for my first ever steak attempt! Multi-tasking in the kitchen doesn’t normally bother me and in actual fact I enjoy the challenge of bringing a meal together so I think it was just the fact that I’d spent £5 on this steak that was affecting me…

While I was Googling, a hit appeared for possibly my favourite food item on earth, Creme de St Agur, explaining that a simple blue cheese sauce could be made just by heating the dip up! GENIUS! I can’t believe we’ve never done this before, we always just serve it cold with crisps and nibbles. It was like a whole other world of warm, cheese based snacks was suddenly introduced to me. Decision made, I dumped the dolcelette and grabbed a tub of my good friend Mr Agur.

Back home, preparations began for the steak. We were actually staying in my brothers flat for the weekend to look after his kitten and I was slightly concerned at the lack of ventilation as I knew things were going to get smoookkkeeeyyy! We placed the kitten in the bedroom for the few moments the steak was cooking so that we could crack the window right open. I heated up a grill pan to the very highest it would go and watched it smoke, trying to ignore the fact this goes against everything I’ve ever been told about cooking. The steak went on the pan with an almighty sizzle and I let it cook for 2.5 minutes before flipping it over. It had impressive sear marks which I was pleased with and it was smelling great. I heated up the St Agur in a pan and served my potato wedges onto the plate. Once another 2.5 minutes had gone by I bit the bullet and placed it on the plate. I’d rather have it slightly too rare than overcooked and I knew it’d keep cooking once it was on the plate. I spooned a very generous amount of Creme de St Agur over it and left it to rest for a couple of minutes while we let the smoke disappear. It actually didn’t get as smokey as I’d been led to believe through reading online, so that was great. I still wouldn’t recommend doing this in a tiny enclosed kitchen though and it would definately be easier on a BBQ. Once the smoke had all but gone I left the extractor fan on, closed the window and let the kitten back in. We were ready to eat! Obviously, Ben politely declined the steak and instead opted for wedges and Quorn meatballs, with BBQ sauce. A winning combination.

I was so excited and nervous to cut into my steak and see how it had fared during the cooking process. The result? An unprecedented success!

These photos are awful because I was so eager to eat that I didn’t really play about with angles or shots or anything…but you get the gist.

The sauce was INCREDIBLE but the blinding white colour was ever so slightly off-putting – I think I’d prefer a pale, creamy yellow if I was being really picky. The flavour was spot on though, the best blue cheese sauce I’ve ever had I think. Probably because it was just melted cheese and cream. Or liquid fat, if you will. Using Creme de St Agur is an excellent lazy-boy option for blue cheese sauce and I really recommend it. The website advises using a microwave but I heated it gently in a saucepan and it was perfect. 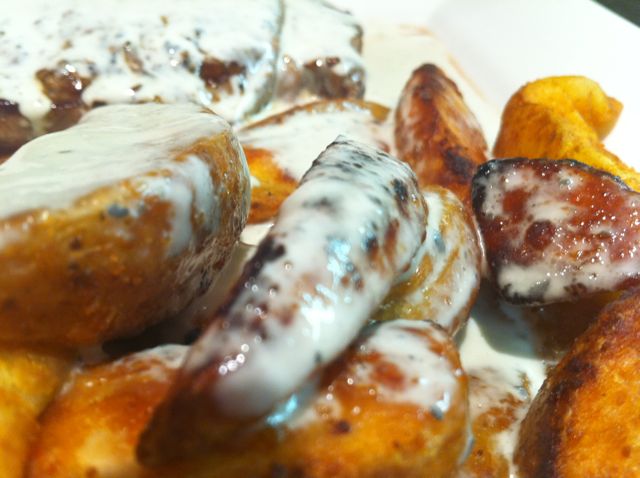 I tried valiantly to show the colour of the inside and how tender the meat was but the urge to pick it up and shove it in my face was too strong. Trust me when I say, it was medium rare. Success! So, 2.5 minutes on each side of a 1.5/2 inch piece of meat really will produce a medium rare steak. You can see in the below photograph how juicy and moist it was – the juices mingled with the sauce to create a really quite magnificent meeting of meat and dairy.

This meal was OUTSTANDING. I am thrilled that I can now recreate almost-restaurant quality steak at home and it really is very easy. Obviously I’ll still be ordering it when we go out to nice restaurants but perhaps I’ll be able to order something different if we go to a bog standard pub, as I now know I can make it at home just as well, if not better.

One thought on “Ode To Steak With Blue Cheese Sauce”