We had tickets to Derren Brown on Saturday at the Mayflower in Southampton and wanted to go out for dinner first. We wanted somewhere that wasn’t too expensive, having spent a lottttt of money the week before in Disneyland Paris (lots of posts coming up about DLP food!) but all the Italian etc restaurants near the Mayflower were (understandably!) pretty pricey. While trawling through Google I came across a Mexican restaurant that, while not cheap, sounded really nice and fun and something a bit different. They had LOADS of veggie options which was a lovely surprise, plus an extensive vegan menu! Not something you see very often at all!

I had booked a table for 5.30 and when we entered the restaurant (located on Bedford Place) it was really quiet with only a few other tables occupied because it was so early. We were seated in a cute little booth-for-two near the door which I was quite happy with. We had to wait about 10 minutes to order drinks which was a bit surprising given how quiet they were but I think they were slightly understaffed – we noticed lots of new staff come in at 6pm so that must be when the busy period starts.

We were in the mood for cocktails! I ordered a ‘Saucy Senorita’ which was a rasberry tequilla long drink, delicious! Ben went for the standard Margarita which he really enjoyed – made a nice change from the over-priced and not very authentic Marg’s he’d been receiving in Disneyland Paris!

I had seen online that the restaurant was offering a complimentary portion of nacho’s if you ‘Liked’ their Facebook page. I had ‘Liked’ it before we left but then got very confused as there was no mention of the offer or instructions anywhere on the page. But, I figured it was worth an ask! The waiter said if we could prove we’d Liked the page then we could definately get some! Cue a few frantic attempts at accessing the page on our phones with weak internet signal but it didn’t matter – he bought the nacho’s out a few minutes later and said we didn’t have to show him, he believed us! Fabulous.

The nachos were a very generous portion and easily big enough to share even though they were a single portion! 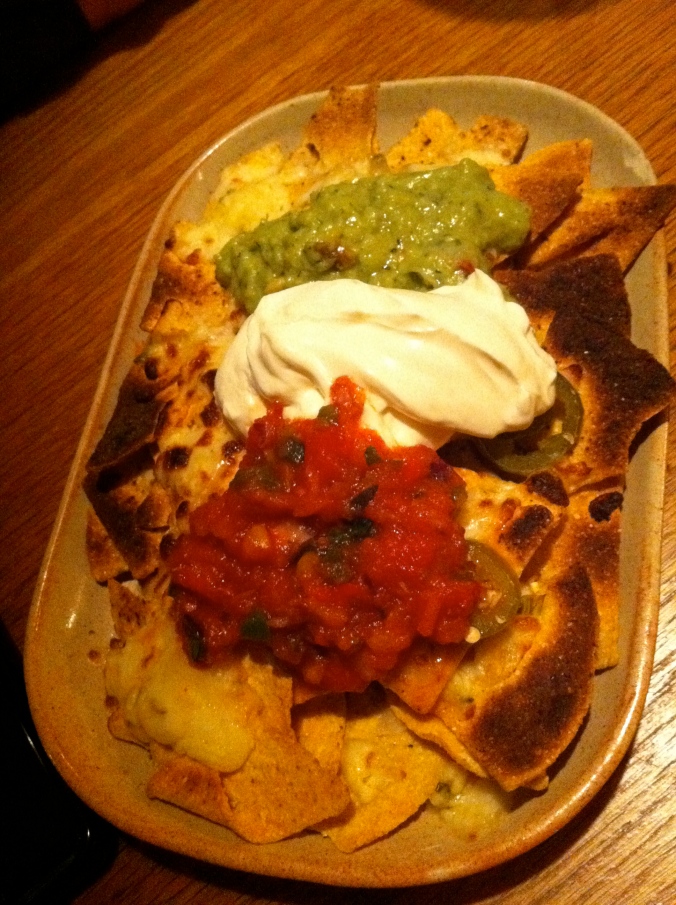 Loads of fresh guacamole and sour cream and a pleasantly spicy salsa which, coupled with the sliced jalapeno’s on top, packed a serious punch!

We finished the nacho’s in no time but again had to wait a while for a waiter to return to take our main course orders.

Ben went for the Fajita Vegetables Burrito which came with fajita spiced fries. He also got a side of chargrilled corn on the cob which is his absolute favourite thing ever!

I was a little bit more greedy/foolish in my ordering. I couldn’t decide what to have so opted for the ‘Poco’ Market Plates – small plates of a few different dishes, a bit like tapas. As it was before 6pm there was a 3 for 2 offer on all of the plates. So, instead of getting four, I got six! Oops! Can’t resist an offer like that and as this restaurant was already somewhere we were thinking of revisiting I thought it would be the perfect opportunity  to sample some new flavours. I chose a selection of the plates which consisted of soft tacos, quesadillas etc with different meat and fish fillings. I thought the plates would be small as the website recommends 2 or 3 as a starter each. Little did I know what I’d got myself into…

After a fairly long wait of about 20 minutes, our main courses were brought out. Ben said he could see the waiter carrying loads of little plates out of the kitchen behind me and thought I may have slightly over-ordered…

Did I ever! The plates were huge! With 2 of each item on them! I was slightly overwhelmed. We struggled to make room for them all on our small table and I thought maybe the waiter could have suggested we move to a bigger table – I had to put my cutlery on the chair next to me and there was no room for drinks glasses or our water jug! Here is my oversized feast: 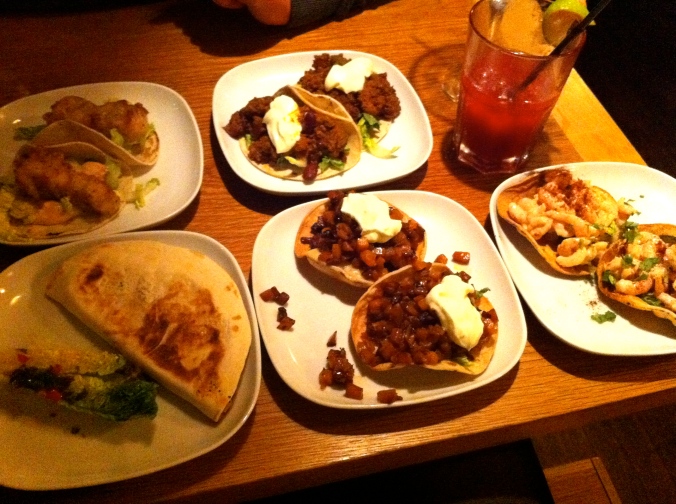 And the other side of the table…

I had 6 dishes. My favourite’s were the two quesadillas – ‘Yuccatan’ pork which was gorgeous, smokey BBQ pulled pork with cheese, mmm! I also got the Chorizo and Potato with roasted thyme. Both lovely but they didn’t photograph well!

I also really enjoyed the fish soft tacos with chiptle mayo. I’ve been wanting to try fish tacos since I saw them on a show about street food on Food Network and they were as delicious as I imagined they’d be! Lovely soft beer-battered cod pieces, crisp iceberg lettuce and a generous slather of the chipotle mayo. 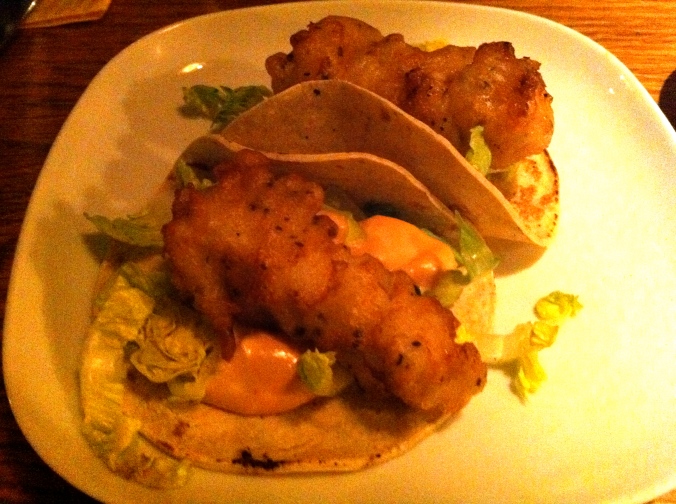 Unfortunately the othe 3 dishes weren’t quite so stellar. The chipotle prawn tostadas were VERY odd – they were tiny cold prawns in a marie rose sauce! The sauce was flavourless and I left most of this dish. I think I expected battered king prawns, a bit like the fish tacos, so to receive a souped up prawn cocktail was a bit of a shock! 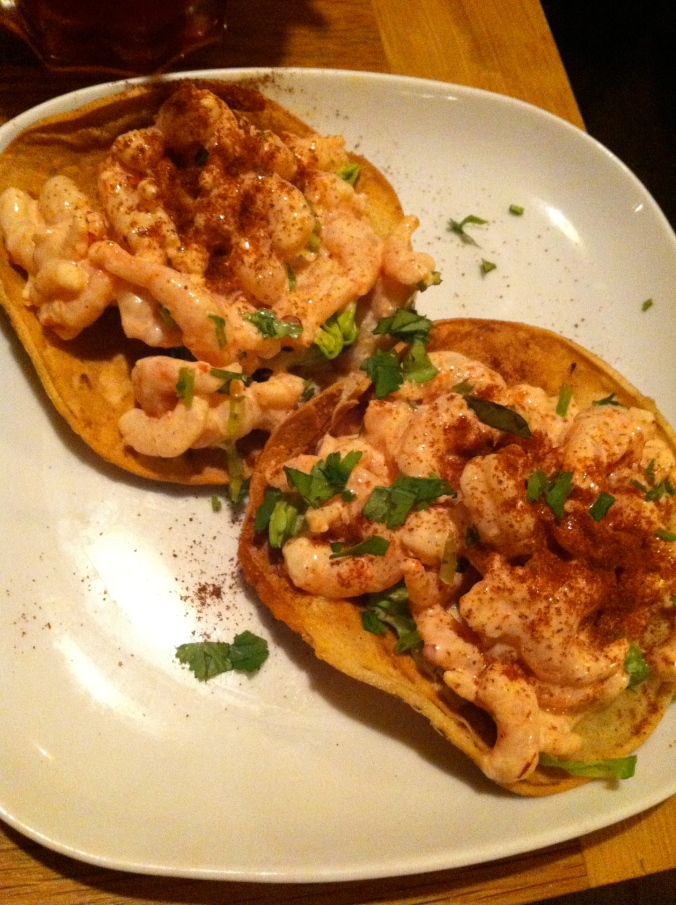 The next dish was unfortunately so spicy I couldn’t eat it. These are the beef mole chilli soft taco’s. They had a nice smokey flavour but there was way too much jalapeno in the chilli.

Finally, I had the ‘Ancho’ squash tostadas – ordered mainly for Ben’s benefit as they are a vegetarian dish of roasted butternut squash, dried chilli and baby spinach. They sounded lovely…but they were tasteless! Ben took one bite and returned to his burrito and I ate half of one before admitting defeat. Unfortunately the butternut squash just tasted of oil with no discernable flavour.

So overall, 3 out of 6 I loved! The chilli was unfortunate as I have a low tolerance for spice and as I said, it did have a nice smokey flavour. The quesadillas were the best.

Ben really enjoyed his main course! He had a big burrito stuffed with fajita veggies, rice, cheese, beans and guacamole which he demolished. The fajita spiced fries and corn on the cob were also a success and he wants to recreate the corn some time soon! They chargrilled it with lime and chilli and he said it was like nothing he’d ever tasted. 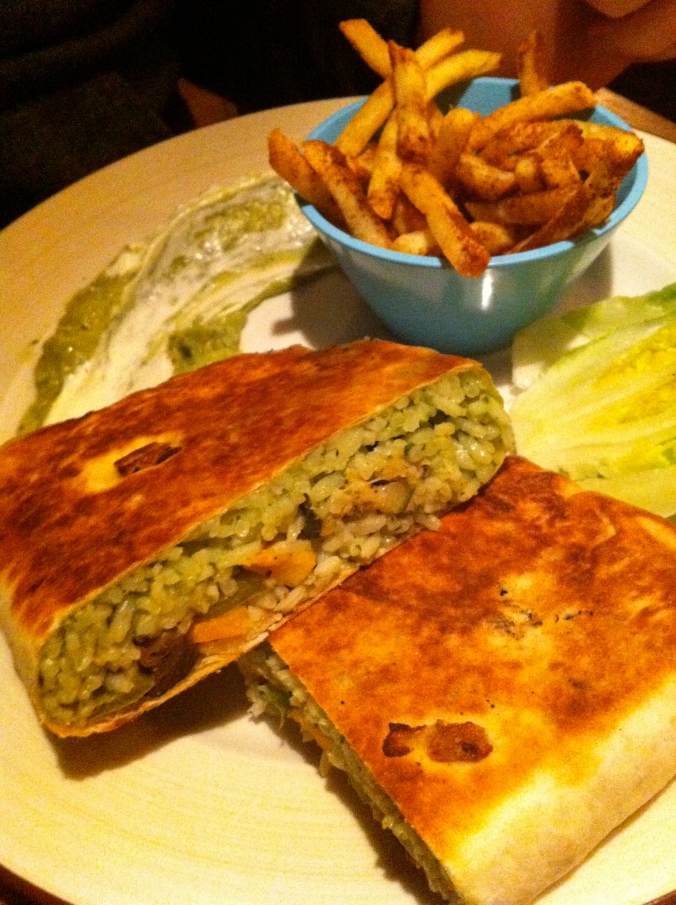 We were much too full for dessert so paid our bill which came to about £50. Not bad for dinner for two with a drink each although taking into account we got the nachos free and two of my dishes, a little more expensive than we usually would pay. Overall, we will definitely be returning to La Cantina as the atmosphere is really nice and buzzy and the food is good – I’ll just pick a bog-standard main course next time now that I know what I like!